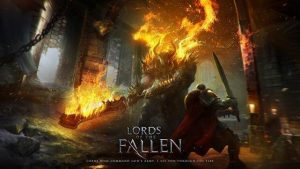 Lords of the Fallen is a fantasy action RPG set in a harsh world where humanity has defeated its God. When his army starts to re-emerge from its demonic realm, led by the formidable Lords, humanity turns to an unlikely defender for help.

Lords of the Fallen offers a deep and satisfying melee combat system with weapons, armour and skills influencing speed, power and agility. Every fight is both a challenge and a meaningful victory. Powerful and spectacular magic complete the arsenal. Embark on an epic journey of combat, exploration and discovery to become the world’s salvation… or doom.

An original world where humanity attempts to purge all evil from its own nature and criminals are branded forever for all to see
Legends and history to discover, epic locations to explore

Visually impressive, tactically powerful spells and supernatural abilities
Magic can serve as a force multiplier and to adjust the learning curve when necessary

A host of demonic and human opponents with individual tactics, combat styles and preferred fighting distance
Epic boss encounters with Lords – the generals of the Rhogar army

Choose Warrior, Cleric or Rogue to lock in your arsenal of spells
Dozens of magical items
9 weapon classes
All skills, weapons and armours available to each class for nearly unlimited freedom