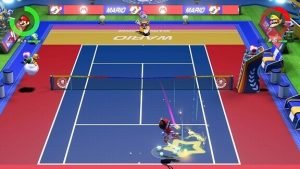 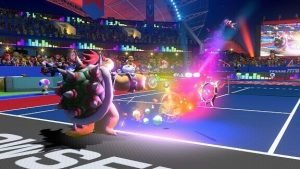 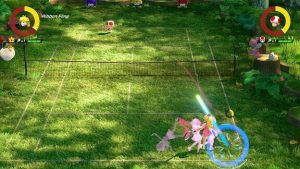 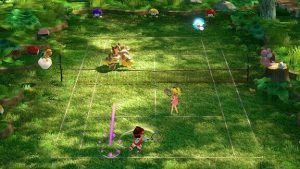 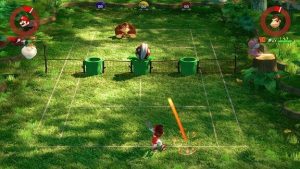 The gameplay of Mario Tennis Aces consists of playing matches of tennis with various characters from the Super Mario series.
Players can pick from Mario, Luigi, Wario, Peach, Waluigi, Daisy, Rosalina, Yoshi, Donkey Kong, Bowser, Toad, Toadette, Chain Chomp, Bowser Jr. and Boo to play as.
Similar in fashion to previous installments of the series, Aces incorporates many techniques, such as “topspins”, where the ball travels parallel to the direction hit, “slices”, where the ball curves to one side when hit, and “lobs”, where the ball travels upwards.
Aces adds several new mechanics to the Mario Tennis series. Using the motion controls of the Joy-Cons, the player is able to initiate a “zone shot”, where the player can aim directly where the ball will go while in a pause state.
If the opponent counters the zone shot, their racket will take damage.
When a racket takes three damage, it will break, forcing a forfeiture if it is the user’s last racket.[5] However, players are able to counter one of these shots without taking damage using a “block”, which activates if the timing when hitting the ball is completely correct.
Another new addition in Aces is “zone speed”. When a player activates zone speed, the match goes into slow-motion, but their character stays at normal speed, making it so faraway shots are easier to reach.
However, the zone shot and zone speed moves only become available if the player’s “energy gauge” is full enough. To refill the gauge, the player must keep a rally going with the opponent, or alternatively, they can use the “trick shot” ability.