It’s almost time! Sackboy will make his long-awaited return to PlayStation alongside the launch of the PS5 this November. I’ll be honest… the prospect of the game finally being released is a little bit scary…but also incredibly exciting!

We have been making this game for a looooong time and even now just a few weeks from launch we’re STILL tinkering, making the final tweaks and applying the finishing touches.

I’ve been so lucky to be part of this incredibly talented team who have a genuine passion for Sackboy. Each one of us has put so much into making this game and we are incredibly proud of what we’ve achieved. We hope that shines through when you play the game at home!

When we kicked off this project our goal was simple: to give players an amazing, 3D, co-op adventure. The video above gives some insight into how we went about that, starting with Sackboy’s controls, crafting the worlds he explores, designing gameplay with loads of variety and layering on top anarchic, slapstick co-op multiplayer*.

We wanted every level in the game to feel unique and to continually surprise you with what comes next. In one stage you’ll be careening through a mountain pass on a runaway train, the next exploring a forgotten temple or facing off against a hostile baddie. We’ve mixed up the gameplay with a bunch of new power ups – including one which at one point quite literally turns the world on its head! And the game has an UN-BEL-IEV-ABLE soundtrack – there are moments where the music is sure to bring a smile to your face. 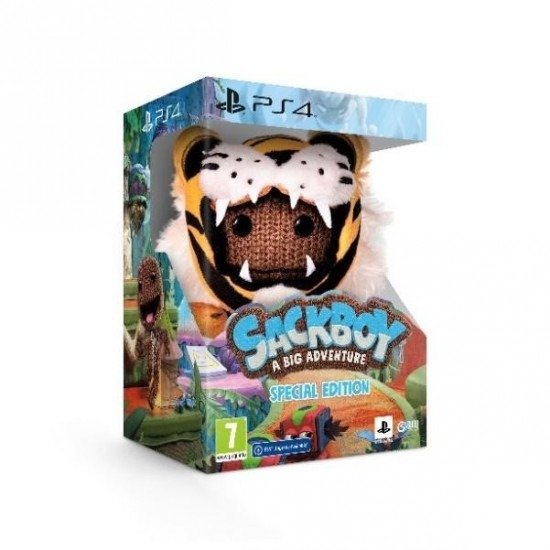 As you’ll know if you have played a Sackboy game before he is a BIG fan of fancy dress. There are more than 60 costumes to discover and you can easily mix and match pieces from different costumes to create your very own custom Sackboy. But we haven’t stopped there, we have also created a full emote system so you and your friends can hug, chest bump, dance and play air guitar together.

On the subject of co-op, this game is undoubtedly great in single player, but….. throw some friends into the mix and it’s an absolute blast with so many laugh-out-loud moments and plenty of fun griefing opportunities!

Right, that’s enough of me waxing lyrical about the game.

Now I’d like to give you a sneak peek at our Digital Deluxe Edition, available on both PS4 and PS5, and the limited **Special Edition only on PS4, both of which include some frankly delightful content to accompany the game.