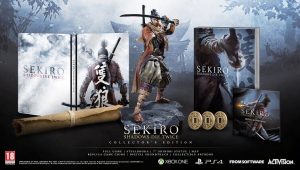 
Sekiro: Shadows Die Twice is an upcoming action-adventure game played from a third-person view. Although compared to FromSoftware’s Souls series, the game features no role-playing elements, such as character creation, classes, and equipment upgrades, as well as having no multiplayer elements.Rather than attacking to whittle an enemy’s health points, combat in Sekiro revolves around using a katana to attack their poise and balance instead, which eventually leads to an opening that allows for a single killing blow.The game also features stealth elements, allowing players to immediately eliminate enemies if they can get in range undetected. In addition, the player character has the ability to use various tools to assist with combat and exploration, such as a grappling hook and a torch. If the player character dies, they have the option of being revived on the spot under certain conditions instead of respawning at earlier checkpoints